The lepus cornutus or horned hare is a type of hare or rabbit that in the 16th, 17th and 18th centuries was believed to exist 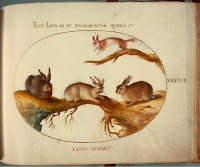 Horned hares were described in medieval and early Renaissance texts, both as real creatures and as farcical or mythological ones, e.g. by Rabelais in his Gargantua and Pantagruel. But the first mention of the lepus cornutus as described here as a real animal comes from Conrad Gessner in his Historiae animalium, mentioning that they live in Saxony.
Many other scientific works on animals repeated this or similar claims, often with the same depictions. These include John Jonston's "Historiae naturalis de quadrupetibus libri" from 1655, whose illustrations were reused in e.g. the 1718 "Theatrum universale omnium animalium, piscium, avium, quadrupedum, exanguium, aquaticorum, insectorum et angium" by Ruysch.

The jackalope is an antlered species of rabbit, unfortunately rumored to be extinct, though occasional sightings of this rare creature continue to occur, suggesting that pockets of jackalope populations continue to persist in its native home, the American West.

The jackalope is an aggressive species, willing to use its antlers to fight. Thus, it is also sometimes called the "warrior rabbit."

Jackalopes possess an uncanny ability to mimic human sounds. In the old West, when cowboys would gather by their campfires to sing at night, jackalopes would frequently be heard singing back, mimicking the voices of the cowboys. Jackalopes become especially vocal before thunderstorms, perhaps because they mate only when lightning flashes (or so it is theorized).

When chased, the jackalope will use its vocal abilities to elude capture. For instance, when chased by people it will call out phrases such as, "There he goes, over there," in order to throw pursuers off its track. The best way to catch a jackalope is to lure it with whiskey, as they have a particular fondness for this drink. Once intoxicated, the animal becomes slower and easier to hunt.

The jackalope is now most commonly sighted in the states of Colorado, Wyoming, and Nebraska. However, the jackalope does appear to have a European cousin, which in Germany is known as the wolperdinger. In Sweden, a related species is called the skvader. 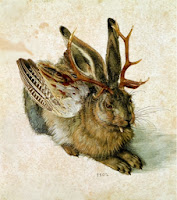 Bavarian folklore tells of the wolpertinger (also called wolperdinger, poontinger or woiperdinger), an animal allegedly inhabiting the alpine forests of Bavaria in Germany. It has a body comprised from various animal parts — generally wings, antlers, tails and fangs, all attached to the body of a small mammal. The most widespread description portrays a horned rabbit or a horned squirrel.

Stuffed "wolpertingers", composed of parts of actual stuffed animals, are often displayed in inns or sold to tourists as souvenirs in the animals' "native regions". The Deutsches Jagd- und Fischereimuseum in Munich, Germany features a permanent exhibit on the creature.
It resembles other creatures from German folklore, such as the Rasselbock of the Thuringian Forest, or the Elwedritsche of the Palatinate region, which accounts describe as a chicken-like creature with antlers; additionally the American Jackalope as well as the Swedish Skvader somewhat resemble the wolpertinger. The Austrian counterpart of the wolpertinger is the raurakl.

The skvader originates from a tall tale hunting story told by a man named Håkan Dahlmark during a dinner at a restaurant in Sundsvall in the beginning of the 20th century. To the amusement of the other guests, Dahlmark claimed that he in 1874 had shot such an animal during a hunt north of Sundsvall. On his birthday in 1907, his housekeeper jokingly
presented him with a painting of the animal, made by her nephew and shortly before his death in 1912, Dahlmark donated the painting to a local museum. During an exhibition in Örnsköldsvik in 1916 the manager of the museum became acquainted with the taxidermist Rudolf Granberg. He then mentioned the hunting story and the painting and asked Granberg if he could re-construct the animal. In 1918 Granberg had completed the skvader and it has since then been a very popular exhibition item at the museum, which also has the painting on display.

﻿Jackalopes Actually Do EXIST in Nature!!

The most curious thing about antlered rabbits or Jackalopes is that they do exist. The cause of the “antlers” like growths in rabbits is a Shopa papilloma virus. This disease is very common in rabbits and is called papillomatosis.
These sick rabbits might be as much responsible for the legends and stories in European and American folklore.
﻿﻿﻿
﻿﻿﻿

WunderKabinett is most literally a cabinet of wonders; a place in which miscellaneous curiosities, odd, wondrous rarities, and artists produced artifacts are brought together for contemplation and pleasure.

Our aim is to juxtapose apparently unrelated cultural artefacts and phenomena to show their interconnectedness in ways that encourage curiosity about the world.

The world of WunderKabinett is limitless, there are no boundaries to how you express yourself, from the things you wear, the music you love or the little elements that make your home your funky abode.

WunderKabinett is the place to find the curios to complete your collection, the perfect piece for your wardrobe that typifies you or just a cool place to hang, chat and soak up the creativity.

Our Curatorial approach is a culmination of research, creative and curatorial practice which allows viewers to encounter many kinds of work from across all disciplines, ranging from intimate installation to thought-provoking cultural practice.